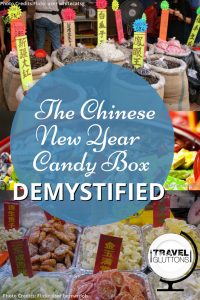 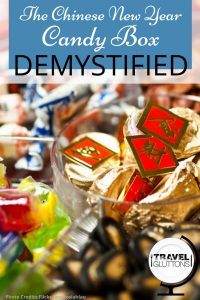 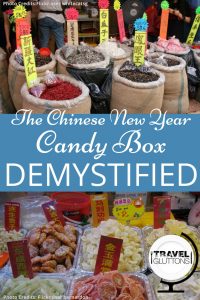 Today is the first day of Chinese New Year. Gung Hey Fat Choi (a common Cantonese phrase used to greet people during this time of the year)! Chinese New Year, also referred to as Lunar New Year or the Spring Festival, is the most important holiday on the Chinese calendar. It’s a holiday filled with the colour red, family gatherings, and more importantly, an abundance of symbolic food that brings good luck and fortune. Lots and lots of  yummy food. You’ll always find a variety of “lucky” treats in a Chinese New Year candy box, which is an almost mandatory utensil during the Chinese New Year.

The candy box is also called the “complete box” or “tray of togetherness”, which means that you’ll have everything in abundance for the upcoming new year. You won’t find an empty candy box during the new year as it’s bad luck. The Chinese New Year candy box is usually a shade of red or black with golden details, and has several compartments inside to contain different goodies. When you visit someone’s home during the new year, the host will offer you the candy box so the treats you choose are the symbolic blessings the host offers you.

On top of the candy box, you’ll usually find a pair of mandarins with intact leaves. Though their bright, vibrant orange colour is welcoming, refrain from grabbing them for a bite as they serve as a decorative display. Mandarins symbolise wealth as its Cantonese word 柑 shares a similar sound with the word for gold 金.

Seeds are a staple food of the candy box as they signify fertility because seed and son share the same Chinese character 子. You are expected to grab a handful of the seeds from the candy box and this action is interpreted as “grabbing silver” 抓銀. There are three popular types of seeds in red, black or white. Amateur seed eaters should go for the black watermelon seeds first, as they are usually the biggest among the three. After some practicing, you can then move on to the red ones – which are also watermelon seeds but are dyed red. The lucky, happy red colour makes the red seeds the most popular ones during the new year. But I’m not a big fan because they’re smaller and more slippery. My personal favourite is the white seeds. They are pumpkin seeds and their shells have a slightly sweet flavour.

The most common approach to eat these seeds is by using your teeth. Take a seed, hold the pointed end of the seed towards you, and position the seed perpendicularly between your front teeth. Now it’s go time —bite down gently so your teeth have a firm grip on the upright seed, then bite down a little more until you hear a crack. Remove the seed from your mouth to pry open the shell with your fingers and eat the tasty seed inside. If you want to eat the seeds like a local, open the cracked shell with your front teeth, expertly extract the seed with your tongue, and then discard the shell. Chinese aunties don’t even need to look at the seeds and can carry on casual conversations while devouring bagfuls of seeds. If you’re not yet ready to show off your seed eating skills in public, you can always get a watermelon seed cracker.

Sweets are a must-have in the candy box too because who doesn’t want a little sweetness in the upcoming new year? Chocolate coins are the obvious choice as they resemble a gold coin. Ferraro Rocher is a popular option too because of its gold wrapping and round shape. Basically anything sweet, in festive colours, and individually wrapped will fit into the candy box perfectly. While many modern candies have more attractive packaging, I still long for some authentic Chinese New Year candy that reminds me of childhood.

If sweets are not enough to satisfy your sweet tooth, how about some candied fruits and vegetables to finish the job? Chinese New Year is about being together with friends and family. Candied coconut chunks or strips are popular as the Chinese characters of coconut share similar pronunciation with the characters of “grandpa” and “son”, which signifies family unity. Other common components of the box includ candied lotus seeds and candied lotus root which symbolise fertility and family ties respectively. My favourite is candied winter melon because of its texture – a slightly crunchy exterior, and a soft and juicy inside.

After taking care of your sweet tooth, it’s time to fill your stomach with some greasy food to keep you warm and cozy. Deep fried dumplings stuffed with roasted peanuts, roasted sesame, and shredded coconut resemble an ancient Chinese gold ingot because of its shape and golden brown colour. And you can add a little extra smiles to the new year with some “smiling sesame balls”. They are just deep fried sesame balls but the way they split resembles smiling faces and hence symbolises happiness and laughters.

If your new year’s resolution is to eat healthily, you may want to stay away from the sweets and deep fried treats. Luckily, on top of the seeds, plenty of nuts can be found in the Chinese New Year candy box too. Pistachios are called “happy fruit (nut)” in Cantonese, so eat more and you’ll have tons of happiness in the new year. There are also cashew nuts that resemble a mini ancient Chinese gold ingot and peanuts that symbolise longevity.

I hope you’re ready for the candy box next time you’re visiting family or friends during Chinese New Year. But remember, never help yourself to the box until it is offered to you, and always take something out of it for good luck.

The best time to visit Hong Kong is Fall as it’s often dry with moderate temperature (around 20-25°C). June to August can be hot and rainy. July to September is the peak typhoon season. Winter in Hong Kong is relatively mild due to its subtropical climate.

Travelling to Hong Kong by air will allow you an opportunity to explore the busy, famous Hong Kong International Airport on Lantau Island. Inside the airport, you can find the usual shops and food joints—but also an education park, an IMAX movie theatre, and even a multi-media golf place.

Hong Kong is not only a shopping paradise, it’s also a place to be for foodies. There are so many must-try food items in Hong Kong, but to name a few. Dim sum is a must-try to experience the local culture in a noisy dim sum restaurant while tasting the delicious bite-size goodies. Adventurous eaters can give chicken feet a go. Hong Kong bakeries are also full of surprises—give the different versions of pineapple bun a try and you won’t regret it. Make sure you know how to use a Chinese spoon to dig into congee and soup noodles in Hong Kong. To keep you warm in Hong Kong, consider claypot meals, snake soup, and hotpot.

For more information about Hong Kong, check out the webpage of the Hong Kong Tourism Board.