Spotlight On: A Wandering Casiedilla 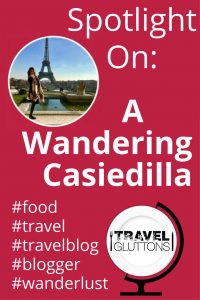 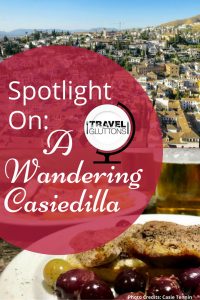 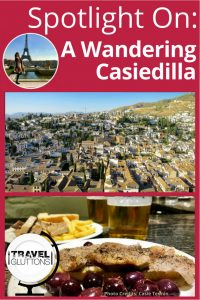 Around the world with the hottest food and travel profiles.

Well, I’m a lot of things! To start, I’m a A Wandering Casiedilla. No, I’m not a girl disguised as Mexican food… although my little logo suggests I am! I’m a travel blogger from the suburbs of New York City who moved to Spain three years ago to follow my two passions… traveling and eating! I’m now a part time English teacher abroad, which helps sponsor my very expensive habit of eating my way through the world. While I’ve lived everywhere from a tiny Spanish village to the bustling capital of Madrid, I’m currently living in the Andalucian city of Granada.

2. What is your site ‘A Wandering Casiedilla’ about?

A Wandering Casiedilla is a Food, Travel and Culture blog about finding those off-the-beaten-path, authentic eats. Not only do I hunt down the best spots in a city to eat like a local, but I write about the quirky city-natives and local habits that I encounter on the way! While I write about places all over Europe and beyond, I’m based in Spain. Therefore, you’ll find a surplus of delicious and useful information about the local culture and eats throughout this “tapalicious” country! Follow me on Facebook, Instagram, and Twitter.

3. What is one food tip you would give about Granada, Spain?

Fun fact: Granada is the city of FREE tapas! That’s right… I said free. When you order a drink (i.e. beer, wine, soda) you get a plate of free food with it! If you know the good spots to go, you shouldn’t ever have to “pay” for a full, quality meal. My favorite tapas bar is Chantarela. This tapas bar is always packed with locals for a reason. Their tapas are downright delicious, a generous portion and of the highest quality. With three beers (2.50€ each), both you and your stomach will be happy!

4. What is one travel tip you would give about Granada, Spain?

Most people visit Granada to see the Alhambra. The Alhambra is a gorgeous Moorish fortress and Palace, famous for its intricately ornate Arabic architecture. The problem? Tourists who come to Granada build their Itinerary around their Alhambra tour, and don’t leave themselves time to visit the city! There is SO much more to this city, that you need at least three days to take it all in. From the cave neighborhood of Sacromonte, to the Moorish hippie barrio of the Albaycin, there are endless alleys full of artisan shops, local eateries and incredible architecture to lose yourself in. Here’s an article I wrote about things to experience in Granada beyond the Alhambra.

5. What is the best thing to eat in Granada, Spain?

Salmorejo! A cold tomato soup similar to Gazpacho, but thicker and creamier. It’s usually eaten in the summer and garnished with jamón, crumbled egg and olive oil. YUM!

One Response to "Spotlight On: A Wandering Casiedilla"