Food Postcard: Move over French Toast, Torrijas Are in Town 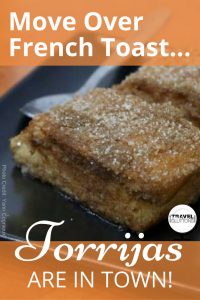 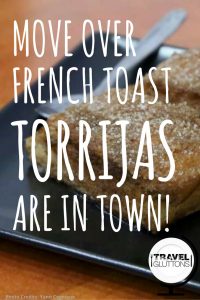 On my last trip to Spain, I had a mission – taste torrijas and bring back a nice picture. Oh! and tell you all about it of course. One little problem: I had never heard of the word before. I don’t speak Spanish, sorry! So after looking it up, I got very excited. Torrijas are the Iberian answer to French toast. I am French. Pain perdu runs in my blood. It is my Madeleine de Proust. I remember coming home from school to the smell of freshly cooked French toast. My mum used to make some every time we had leftover bread, which was quite often. She used to flavor it with aniseed and sprinkle powdered sugar on top. I felt such joy every time. Imagine my delight when I got this mission.

First I did some digging. Invented in the 15th century by nuns, like many desserts in Spain, torrijas were made with stale bread, soaked in milk, honey or wine, and covered with sugar and cinnamon. Consumed all year round, they become unavoidable during Easter, as they are said to resemble cooked meat, forbidden during the Holy week when Catholics abstain from eating certain food. It is said though that its origins go further back, to the Al-Andalus period during which Spain fell under the Moorish kings’ control. Their influence can still be seen today, especially in the southern region of Spain called Andalusia, feeding the architecture of the beautiful white-washed villages like Nerja or Frigiliana, the intricate details of the Alhambra in Granada, the magnificence of the cities of Cordoba or Sevilla. Even the food of this region retained marks of this rich history. Torrijas are one of them. Zalabiya, a kind of brioche fried in oil and covered with honey, very popular during the Moorish empire, is said to be the ancestor of the modern days torrijas.

And in Andalusia I was. Just the perfect place to taste the decadent Spanish toasts. One morning, I sat in one of the pastry shops you find all over town for an authentic Andalusian breakfast: “Un café con leche y torrijas, por favor“. The waitress asked me to choose from two flavors: one covered with sugar and cinnamon, the other soaked in honey. I went for the sugary one, less caloric (so I thought) and the closest to the French toast I remembered so vividly from my childhood. After taking my perfect picture (well after twenty in reality), I finally took a bite of the Spanish version of French toast. And I loved it. The bread was so deeply soaked in the sweetened milk that it was creamy, smooth, the texture closer to one of a cake or bread pudding. The flavor was very sugary and tasted much like a sweet omelette. I immediately felt at home, with my café au lait and my pain perdu in front of me, Spanish Style! I loved it so much, I was back the next morning to have my share of torrijas, and some other Spanish pastries like the delicious Napolitana, sort of flattened croissant filled with chocolate, the pestinos, Andalusian sweet fritters, or the lovely carlitos, a light elongated pastry filled with pumpkin. But that’s another story.

Can I say: Mission accomplished! Now it is your mission, should you choose to accept it!

One Response to "Food Postcard: Move over French Toast, Torrijas Are in Town"