Luck of the Irish…Irish Coffee That Is 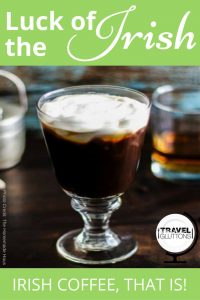 The Origins of the Irish Coffee

If you’ve ever traveled to Ireland, either the Republic or Northern Ireland, chances are that you came across the famous Irish Coffee, a boozy spin on everyone’s favourite cuppa’ joe. While the name should give its origins away, many people still think that this hot beverage came into being in San Francisco’s famous Buena Vista Cafe in the 1950s.
​
​In fact, Irish Coffee was first served at the Flying Boat Terminal at Foynes, Ireland in 1943 by a bartender called Joe Sheridan, who indeed later moved to San Francisco and worked at the Buena Vista Cafe. Here he met journalist Stanton Delaplane of the “San Francisco Chronicle” who helped spread the word about this new type of coffee. Ironically, Delaplane later admitted that he “can’t stand the stuff anymore.”

[clickToTweet tweet=”The first Irish #Coffee served was in Ireland in 1943 by a bartender called Joe Sheridan.” quote=”‘In fact, Irish Coffee was first served at the Flying Boat Terminal at Foynes, Ireland in 1943 by a bartender called Joe Sheridan.'” theme=”style6″]
​Foynes, the first Irish transatlantic airport for Pan Am, was where Ireland’s first passenger commercial flights from New York departed from in 1939. In 1943 a flight en route to New York turned back to Foynes due to bad weather and Sheridan was asked to make food and drinks for the freezing passengers. He poured Irish whiskey into the coffee and when the the guests asked him if it was Brazilian coffee he told them it was Irish Coffee. Hence, Ireland’s second-most favourite alcoholic export was born.

How to Make an Irish Coffee

​Sheridan’s original recipe calls for two sugar cubes, one and a half ounces of Tullamore Dew Irish Whiskey, and coffee. First you need to fill an Irish coffee glass with very hot water to preheat, then empty. Pour the hot coffee into the hot glass until it is about three-quarters full, and then drop in the two sugar cubes. Stir until the sugar is thoroughly dissolved, and add the Tullamore Dew Irish Whiskey for the proper taste and body. Top with a collar of lightly-whipped cream by pouring gently over a spoon.

Where to Grab an Irish Coffee in Ireland

If you ever take a trip around Ireland, and you also happen to be fond of this boozy drink, be sure to visit one (or more!) of the following establishments. All of whom, according to their patrons, serve the best Irish Coffee in the country.

If you would rather sample this drink in the comfort of your own home try Sheridan’s recipe or experiment with variations that are available online. Otherwise, here is a little teaser on how industrial amounts of Irish Coffees are being served at the Buena Vista Cafe:

​Where’s the best place you have enjoyed an Irish Coffee?

Writer’s Note: A big thank you to Tasty Ever After, The Homemade Haus and The Spicy Apron for the wonderful photos (and recipes).

Noémi is a thirty-something Hungarian who moved to the Netherlands many moons ago but is still trying to get her head around the clogs, bikes and 'harings' . She considers herself adventurous when it comes to food and travel…although those who have seen her struggle with a haring/ stroopwafel/ stamppot might disagree. She loves trying out new restaurants and dishes and luckily the Hague has been a perfect playground for that.

4 Responses to "Luck of the Irish…Irish Coffee That Is"