How to Eat: Poon Choi 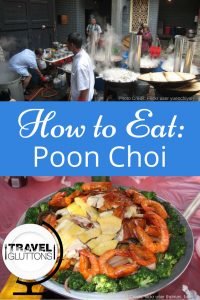 Poon Choi is a traditional dish of the walled villages (also called Wai Tsuen) in Hong Kong. Its literal meaning is “basin cuisine” as ingredients are meticulously layered and served in a basin. There are many different stories on the origin of poon choi. The most popular one says that an emperor of the Song dynasty took refuge in the New Territories so the local villagers served the emperor the best food they could find. As the villagers didn’t have enough food containers, they gathered wooden basins from every household and served the food in them. For hygienic reasons, wooden basins have now been replaced by metal or porcelain ones.

Traditionally, poon choi is served in walled villages during weddings or any special celebrations, and each serves a table of eight. Each table is therefore given a lucky nickname “eight immortals table” because of Chinese people’s obsession of longevity. But nowadays, most walled villages generally up the number of people to 10 per table. And poon choi is no longer confined to the villages and can be found anywhere, from Chinese restaurants to fast food restaurants.

As poon choi is traditionally served during festive, important occasions, the villagers prefer to provide their guests with the best food they have. So you’ll find plenty of valuable ingredients like meat and seafood in the basin and not a lot of vegetables. Poon choi is often offered to the ancestors and gods during the ritual celebration too. The villagers therefore only use fresh ingredients out of respect to the spirits.

Poon choi contains layers of ingredients that are separately prepared and cooked, sometimes days in advance. The most common ingredients include – but certainly not limited to – chicken, duck, pork, abalone, oysters, prawn, dried mushroom, pig skin, fish maw, sea cucumber, lotus root, taro, daikon radish, and bamboo shoot. The key is to layer the food in a way to allow the variety of flavours between layers to complement each other.

Root vegetables and sponge-like food such as pig skin are often used to layer the bottom of the basin to absorb the juices from the all the goodies above them. The final product is usually a stew so its glorious gravy can slowly infuse the ingredients in the basin. The top is then layered with the most prized items, such as roast duck and abalone. Seasonal ingredients are traditionally used in poon choi. During colder months, daikon radish is used as the bottom layer while fried oysters as the top layer. In the summer, bamboo shoots will cover the bottom of the basin and fried eel will be found on top.

At each walled village banquet, a lot of hard work goes on behind the scenes. Let this famous Hong Kong designer show you how a poon choi banquet is put together at his local village.