How to Eat: Glutinous Rice Balls 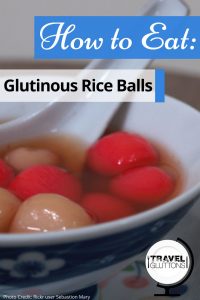 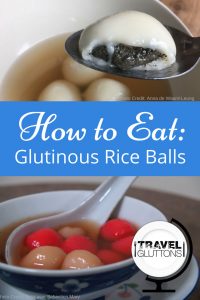 The round shape of the rice balls is the same as the full moon of the Lantern Festival. It also symbolises family togetherness and unity. That’s why they are also served at festivals or family celebrations. But nowadays, they have become a popular dessert that can be eaten any time of the year.

Tang yuan literally means “soup circle”. The white skin of the rice balls is made from mixing glutinous rice flour with a bit of water, which gives the skin its chewy texture. The rice balls are traditionally stuffed with sweet fillings, such as black sesame, red bean or peanut paste. Frozen glutinous rice balls can be easily found at Asian supermarkets, but many families still make them at home. When I was small, I used to make these rice balls with my nanny. My job was to roll the filling into small marble sized balls and the white dough into bigger ones like ping pong balls. Then my nanny would flatten the white dough balls into a circle, add the filling ball to the centre, skilfully close the dough over the filling, and roll it into a perfect round ball.

Here’s a short video to show you how to make your own glutinous rice balls with a black sesame filling.