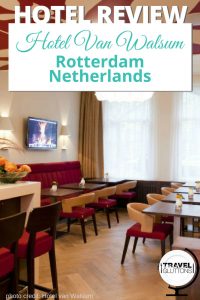 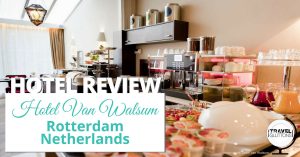 Rotterdam is a modern and vibrant city that shouldn’t be missed when you travel to the Netherlands. Sadly, this beauty came with a great price! During World War II, the city center was bombed heavily by the Nazi-Germans. As a result, most of the old buildings were destroyed, and thousands of people died. Only some of the old buildings survived the war, like City Hall and St. Lawrence Church (Grote of Sint-Laurenskerk). After the war, the city had to be built up again. Today you can enjoy modern-futuristic architecture spread all over the city centre.

As the second biggest city in the Netherlands, Rotterdam also plays an important role in the business and economic sectors. For example, the port of Rotterdam is the biggest and busiest harbour of Europe, and is often nicknamed “the gateway to Europe”. Many international companies have an office there, and popular international hotel chains are represented in the city, as well.

But, if you want to experience staying in an authentic and homely Dutch atmosphere in the middle of this modern city, then the three-star Hotel van Walsum is definitely your place to stay over. The hotel is located on the edge of the city centre on the long and glamourous Mathenesserlaan 199-203. Within a 10-minute walk, you will find yourself in the heart of the city centre, and with only four stops by tram you will reach the Central Station of Rotterdam.

The hotel offers 28 rooms, each with its own identity and atmosphere. There are Single Rooms, Standard Double/Twin Rooms, Comfort Airco Rooms, one Triple Room and one Quadruple Room. All rooms are well decorated and equipped with modern facilities. Besides guest rooms, Hotel van Walsum also offers three, modernly-furnished city apartments, in case you need to stay longer in the city.

During my visit I stayed in the Comfort Airco Room and it was definitely more than just comfortable. The room is 24 m2 wide with a pretty balcony overlooking the main road. The bed is soft and comfortable at 180-210 cm wide. It’s perfect, even if you are as tall as the Dutch. The ceiling is decorated in classical style with beautiful decorations. I absolutely loved the ceiling decoration and the crystal lamp makes the room look elegant and classy. The fireplace decoration in the middle of the room is also an added point for the room atmosphere and it adds to the classical and homey feeling.

In the morning after breakfast, enjoy a cup of delicious, Dutch hot chocolate in the attractive lounge that looks out onto the beautiful city garden! The relaxing atmosphere will make you feel as if you were sitting in your own living room, watching a neighbour’s chubby cat in the garden, birds singing in the tree, or simply gazing at colourful flowers in bloom. You will be surprised that, right next to the busy city centre of Rotterdam, you really can find a peaceful and tranquil place to stay.

The (His)Story of the Three Generations of Van Dam

Hotel van Walsum is a family hotel in the true sense of the word.

On October 1st 1955, Teun van Dam bought the ‘Hotel van Walsum’ and started doing major renovations. In 1958 he created 18 rooms, two of them with a shower (at that time a shower was seen as a great luxury). In 1964 his son, 24-year-old Frans van Dam, together with his wife, Ria Kaptein, took over the hotel from Teun. Soon after they took over the hotel, Ria and Frans bought the adjacent building at Mathenesserlaan 201 A and B, and added it to the main existing building.

The current owners, the third generation van Dams, took over the hotel from their parents in 1998. The two brothers, Anton (who was 28 years old at the time), and Jos (who was only 23), are continuing the family hotel business.  They have brought the hotel into the 21st century, while carrying on the tradition of extending the hotel. In 2001 Anton and Jos bought Mathenesserlaan 203 A and B and created three modern, city apartments for short- and long-term stays.

Both the hotel building and name have an interesting history, as well. Originally, the building was used as a lodging house. In 1936 the widow, A.E. van Walsum, had taken over the lodging house from another widow and named the pension after herself. At that time, it was quite common for a widow to rent out rooms in their house to maintain her living standard and provide a pension.

In conclusion, the hotel’s homey atmosphere, its location to the city centre, and the hotel’s rich history make this a place you will want to stay in. You can be in the middle of one of the businest cities in Europe, and still feel as safe and relaxed as if you are at home. While you’re there, you will probably bump into the owners, Anton and Jos, and have an interesting conversation with them. Both the owners and staff do their best to give their guests a feeling of being in a home away from home.

What You Need to Know

During her visit, Nimas Norma was a guest of Hotel van Walsum.

Nimas is a flower and cat lover who comes from the multi-ethnic country of Indonesia. She loves to travel and trying local dishes. Favourites – Wienerschnitzel, Belgian Stoofvlees, Dutch Pannenkoeken, and Rendang from Indonesia.