Ethiopian Coffee Ceremony: Everything You Need to Know 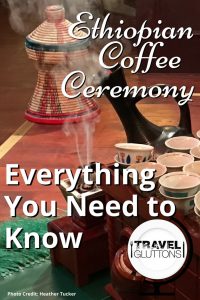 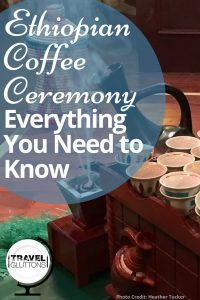 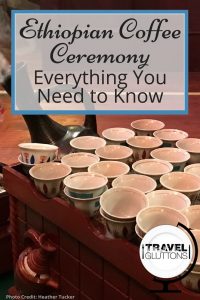 In the 10th-century, Ethiopian nomadic people herded their goats through the Ethiopian Highlands—a rugged mass of mountains, situated in the Horn region. The southern parts of the Highlands are mountainous with stretches of forest. And it is in this forest that the story of coffee begins.

Legend says that it was Kaldi, an Ethiopian goat herder who first discovered coffee. His goats, it seems, were displaying extra energy during the day and refusing to sleep at night. Kaldi noticed this behaviour would occur after his goats had eaten berries from a specific tree. And being the good goat herder that he was, he reported the discovery to the abbot of the local monastery, who made a drink with the berries, which kept him alert during the long hours of evening prayer. Others say he threw them into the fire—as you do with potentially evil things. However, the coffee aroma many rely on now-a-days to wake up, made him think twice. The newly roasted seeds were rescued from the fire and steeped in hot water creating an invigorating drink.

Whether there really was a man named Kaldi with a herd of caffeine high goats or an abbot with an early coffee habit, one this is certain, Ethiopians have a lot of respect for their coffee and no place is this more clearly experienced than at an Ethiopian Coffee Ceremony.

​An integral part of social and cultural life, anyone who ventures to Ethiopia or any authentic Ethiopian restaurant is bound to come face-to-face with this cultural tradition. And if you are invited to join-in, as is likely, it is important to participate. Not doing so would border on the verge of rudeness; the invitation a mark of friendship and respect.

The best way to enjoy the ceremony is with your five senses, and plenty of time on your hands, because short is not a word that can be associated with an Ethiopian Coffee Ceremony.

The ceremony is set around a rekbot. This box like piece of furniture sits on long scented grasses and flowers (or in a more modern setting a green cloth with grass-like edges). On top, the rekbot is covered in empty handle-free cups, ready for serving the coffee in. ​The ceremony hostess, a woman usually dressed in a traditional white cotton garment with coloured woven borders, will begin by roasting the ​coffee beans (bunna) in a flat iron pan above a small charcoal fire. As you watch the beans turn from their grey-greenish colour to a dark chocolate brown, your nose will begin to take in the delectable coffee aroma that tempted Kaldi’s abbot. And your ears will become acquainted with the rhythmatic shuck-shuck-shuck sound, as the hostess gentle swirls the pan, ensuring each coffee bean gets its time above the fire.

Next the coffee beans must cool. After they have reached their optimum temperature they are ground ​on a stone block, using a mortar and pestle or even with an electronic coffee grinder. ​The coffee beans are then placed into the jebena—an earthen (clay) coffee pot—with boiling water. By angling the jebena slightly, ​the grinds can settle on the bottom while brewing. This is also when spices can be added to the coffee. Incense, usually frankincense and myrrh, will be ignited by a hot coal to produce smoke that carries away any bad spirits that are present and cleanses the environment.

Once steam starts coming out of the jebena nozzle, the coffee is ready to be served—poured in a single stream from about a foot above the cups, preventing coarse grounds from ending up inside. The coffee is served with ample amounts of sugar (or salt in the countryside), but without milk. ​Often the coffee is complemented by popcorn, peanuts, a sweet bread or cooked barley—the popcorn a sign of peace and adding beauty to the ceremony with its flower like appearance.

Ethiopian Coffee Ceremony Tip: ​It is impolite to leave the ceremony until you have consumed at least three cups, as the third round is considered to bestow a blessing. Transformation of the spirit is said to take place during the coffee ceremony through the completion of Abol (the first round), Tona (second round), and Baraka (third round).

The Significance of the Ethiopian Coffee Ceremony​

​Gebreala Tadesse whose parents run Walia, an Ethiopian restaurant in Breda, the Netherlands, summed up the coffee ceremony as an important getting together activity. She told the story of how her grandmother would gather with other people after church for the coffee ceremony, socialising and talking about common problems. It’s no wonder then, why an invitation to this ceremony is so treasured.

​Don’t Have an Invitation?

​If you haven’t received a ceremony just yet and want to see more, this video of an Ethiopian Coffee Ceremony is just what you need.

Ethiopia, in the Horn of Africa, is a rugged, landlocked country split by the Great Rift Valley. With archaeological finds dating back more than 3 million years, it’s a place of ancient culture. January to March brings clear, sunny days and average daily temperatures of 25°C (77°F). This is also the busiest time to visit with wildlife spotting at its peak. Those not interested in high temperatures and humid conditions should avoid the rainy season from April to September. October to December offers a more relaxed visit country with lower temperatures a lush countryside. Ethiopia is in the East Africa Time Zone (UTC +03:00) and uses the Ethiopian birr (ETB).

Flights to Ethiopia arrive at Ethiopia’s only international hub, the Addis Ababa Bole International Airport (ADD). The airport is located six kilometres (four miles) from the capital Addis Ababa.​ For information on driving in and into Ethiopia, have a look at this travel guide.

Obviously, attending an Ethiopian Coffee Ceremony should be high on your to-do list. However, if you can’t travel all the way to Ethiopia, have a look for a good Ethiopian restaurant near you. Often restaurants will conduct the ceremony for their guests.

For more information on planning a trip to Ethiopia, visit the Ethiopian Tourism Organization’s website.

Heather is a writer, photographer and explorer of the world with bylines in Archaeology Magazine, Porthole Cruise Magazine, Taste & Travel, amongst others. She is addicted to pen, paper, hotels, organisation and hippos. In addition to Travel Gluttons, you can find her over at Cloggie Central.

One Response to "Ethiopian Coffee Ceremony: Everything You Need to Know"