Food and Drinks Around the World

How to Eat Food From Around the World 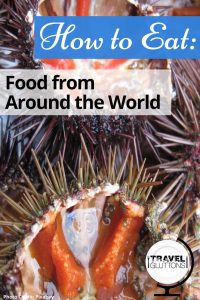 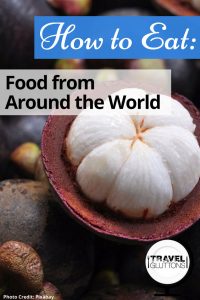 M.F.K. Fisher is rumoured to have said, “First we eat, then we do everything else.” Finally, a piece of advice most people can agree on. But with the United Nations Food and Agriculture Organization estimating that there are 250,000 to 300,000 species of edible plants alone, we all have a whole lot of eating to do. So grab your fork, pull on your comfy trousers, and get ready to learn how to eat some of the best food from around the world.

​Food From Around the World: Fruits and Vegetables

Whether you are following the five portions of fruit and veg a day rule or are an early adopter of the ten a day, you are going to need a lot of fruits and vegetables to keep meeting your goal. Luckily, there is plenty of choice out there, especially when you start looking further afield.

Love it or hate it, there is no middle ground for durian. When it’s ripe, it has a pungent, controversial scent; one that results in a never-ending argument of opposite opinions. But it isn’t just the fruit’s scent to look out for; one durian myth says that you can get drunk by eating too much of it.

So revered was asparagus in ancient times that it was used as an offering to appease Egyptian gods. It is still loved throughout the world, but perhaps not more so than in Germany, where the white spears are favoured over the green and are referred to as ‘edible ivory’.

The mangosteen is a delicious tropical fruit you shouldn’t miss when you travel to southeast Asia. When it’s raw, the skin colour is green, and when ripe it turns from red to dark purple. The secret to knowing how many pieces are inside a mangosteen? Check the petals on the bottom of the fruit. If you see five petals, then you will find five pieces inside your fruit. This is why the mangosteen is a symbol of honesty in Javanese culture.​

Originating in southern China, lychees might look like armoured strawberries, but inside is a sweet, fragrant fruit well worth the shell peeling effort.

​Food From Around the World: Sweet Things

Do you have a sweet tooth? Then you are in for a surprise. From kruidnoten to cream teas, the world is filled with sweet delights, and we can’t wait to introduce you to them. Here’s a sneak peak to get those taste buds fired up.

Following the recipe of Chef Auguste Escoffier dating from the end of 19th century, the floating island—or ile flottante—used to be made with Savoie biscuits or stale brioche, soaked in liqueur, then separated by apricot marmalade. Decorated with chopped almonds and raisins, it was served cold over a crème anglaise or red fruit purée. Today, ile flottante is an extremely light dessert, made with sweetened egg whites cooked in the oven and placed over a crème anglaise or custard, lavishly coated with caramel.​

So popular are pineapple buns—also known as bo lo bao—in Hong Kong, that the city vowed to safeguard the buns (the technique of making them, to be precise) in 2014. And to have a true bo lo bao experience in Hong Kong, you’ve got to try one at a local diner known or cha chaan teng.​

According to urban legend a resourceful local baker came up with the idea for a waffle combining leftover breadcrumbs with syrup. The stroopwafel quickly became a popular Dutch snack amongst the poorer people initially—at one point it was referred to as ‘the poor man’s cookies’ as it was a cheap snack to produce—before becoming a favourite across all the classes.

No one can ever forget their first taste of an alfajor. With smooth dulce de leche sandwiched between two biscuits, it tastes like you are taking a bite out of heaven. As far as food from around the world goes, this is one of our favourites.

​Food From Around the World: Dishes

What is your favourite dish to sit down to in the evening? Are you a snake soup kind of person or do you prefer to sink your teeth into a Karelian pie? When you open up your options to food from around the world, you really will be spoiled for choice.

People in Korea like their pork belly a lot, and they call it samgyeopsal (삼겹살). It means “three (삼) layered (겹) flesh (살)”. Similar to regular bacon, only cut much thicker, it is often served raw and unmarinated—ready for you to cook on your very own built-in grill.​

Chinese hot pot, like fondue, is a group dining activity that can last for hours. Not only are you gathered around one table sharing a meal, but you’re actually cooking your food in a shared pot. And if you want to look like a hot pot pro, you will want to stick with a certain order to cooking your food.​

Roti originated in India, where it is also referred to as chapati, but its popularity has spread throughout the world from Asia to South Africa, from South America to the Caribbean, and so on.

​Food From Around the World: Everything Else

Caterpillars, razor shell clams, cob loaf dip, and pork ears—where to put all those food from around the world that don’t quite fit into one of the categories above? In the “everything else” category, of course!

While on the outside they don’t seem to be the most appetising of meals, sea urchins are comparable to oysters for delivering a fresh, straight-from-the-sea flavour.​

​French are by far the biggest eaters of cuisses de grenouilles—or frogs’ legs—3,000 to 4,000 tons of them being consumed every year in France. But the French may not have been the first ones to eat this little batrachian.​

Balut is a delicacy in the Philippines and other Asian countries, that often scares people away. It may look like your regular white chicken egg on the outside, but don’t be fooled. Cracking one open will reveal an interesting, out of this world gastronomic experience for those who dare.​

A century egg goes by many names: thousand year egg, millennium egg, preserved egg or pidan. Not only do they have a quirky name, they also have a peculiar appearance and an unusual smell.

​If you had to choose, which food from around the world would be your favourite?

Food, Food and Drinks Around the World

Heather is a writer, photographer and explorer of the world with bylines in Archaeology Magazine, Porthole Cruise Magazine, Taste & Travel, amongst others. She is addicted to pen, paper, hotels, organisation and hippos. In addition to Travel Gluttons, you can find her over at Cloggie Central.

7 Responses to "How to Eat Food From Around the World"