How To Drink: Café au Lait 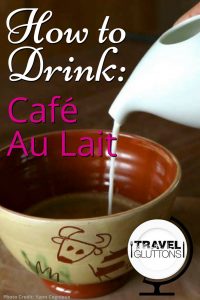 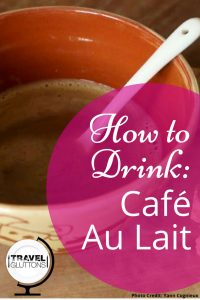 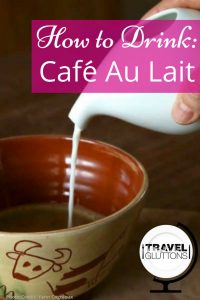 Sitting in the sun at the terrace of a café in France, you are ready to have an authentic French breakfast – a  café au lait served with fresh croissants. Stop right there before you look like a fool ordering it. There is no question about it: café au lait remains a favorite of French people to start their day, but strictly in the intimacy of their homes.

A Little Milk in Your Coffee?

Coffee arrived in Europe from the Orient. The Arab word qahwah became kahve in Turkey, kawa in Polish, koffie in Dutch, kawe in Hungarian. The word café was born. Coffee first appeared in France in XVII century and transformed the food landscape of this era. Travelers, merchants, traders, vessels’ captains knowledgeable of the ways of the East became the initiators of this new drink in Europe and of its practice, importing the coffee beans as well as the utencils necessary to its making. It first landed in Marseille, a major French port, then made its way to Paris and to the French court.

In 1671, the first café opened its doors in Marseille. In 1723, 380 cafés were listed in the «Dictionnaire Universel de Commerce» from Jacques Savary in Paris. Private consumption came later. The passion for coffee had taken over France. By the XVIII century, the French adapted the taste of coffee to reduce the strength and concentration of the beverage. Quickly, they added water, milk, and sugar. The café au lait turned into an absolute rage. Everyone wanted a cup of café au lait for breakfast. The gourmet would warm up half a liter milk then add 40 grams of coffee powder, boil it for half an hour, then let it set for ten hours. You’d better be patient! Before serving, it was heated up in a bain-marie. At the start of the XIX century, coffee with added milk was essential and its usage widely spread in France. In Paris, the smooth and rich scent of coffee invaded every corner of the French capital.

To Enjoy Café au Lait, You Might Want to Know These Simple Facts:

The rage over coffee around the world is not finished. Many trends are taking over the social media channels: tumeric latte, golden coffee, coffee in a cone, nitro coffee. What will be yours? A salted caramel café au lait, may be?

12 Responses to "How To Drink: Café au Lait"